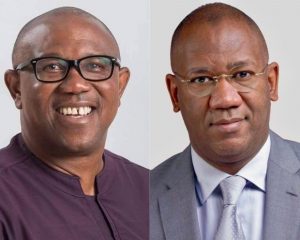 The Economist of London says the “sudden ascent” of Peter Obi, presidential candidate of the Labour Party (LP), represents a “rare chance” for Nigeria.

According to an article published on Monday, titled ‘Peter Obi, A Man Who Carries His Own Suitcases, Could Be Nigeria’s Next President, The Economist, however, said there is still much for the LP candidate to do to get the required votes across the country.

“As public campaigning was about to begin in late September, Nigeria was rocked by the release of three polls showing Mr. Obi well ahead of the two candidates representing the main parties that have misruled Nigeria since the restoration of its democracy in 1999,” the article reads.

“In two of the polls Mr. Obi has a lead of more than 15 percentage points over Bola Tinubu, of the incumbent All Progressives Congress (APC), and Atiku Abubakar of the Peoples Democratic Party (PDP), the main opposition.

“What makes this even more extraordinary is that Mr. Obi is standing for the Labour Party, whose candidate at the previous presidential election in 2019 won just 5,074 votes out of 28m casts.

“Mr Obi’s sudden ascent represents a rare chance for Nigeria. The country ought to be rich: it has huge reserves of oil, gas and other minerals, plenty of fertile land and a young population of go-getters. Yet Nigerians are poorer today than they were ten years ago and 40% of them survive on less than $1.90 a day.

“The reasons why Nigeria is poor are rotten politics, bad governance, and corruption. Politicians in Nigeria have long stirred up ethnic and religious divisions by promising to direct state resources to members of their own group.

“Once in power they have pursued contorted economic policies such as a fixed exchange rate and massive fuel subsidies. Some policies seem to make sense only as a way of allowing cronies to siphon off cash.”

The Economist describes APC’s Tinubu and PDP’s Atiku as not offering much in terms of developmental change while citing previous allegations linking both candidates to crimes in the US.

For Obi, the article also cites the Pandora Papers report on his alleged refusal to declare his assets.

The Economist, however, said while there is no guarantee that Obi winning the presidency will automatically address issues such as corruption, “if he were to sustain his lead until the election in February, he would be the first politician in decades to show that a new sort of politics is possible in Nigeria”.

The article, which also features comments from The Economist’s interview with Obi, makes reference to the LP candidate’s rising popularity, including among youths and on social media, while describing him as an “unlikely revolutionary”.

“Mr. Obi’s surging popularity is due, above all, to perceptions of his character. In a country cursed by politicians of extraordinary ego and entourage, his supporters marvel that as governor Mr. Obi queued at airports holding his own luggage,” the article reads.

“He also slashed the size of his motorcade when he found that 13 of the cars were empty, he says. This not only plays well with young voters but also annoys his rivals.

“Kashim Shettima, Mr. Tinubu’s running-mate, grumbles that Mr. Obi “tends to glamorise poverty” by claiming to own only one watch. (Mr. Shettima, who likes smart watches, says he “has more than two or three”.)”

According to the article, Obi said he would prioritise addressing insecurity, but The Economist added that it is “disappointing” that he is “less keen to emphasize his proposed policies as president”.

Another concern raised by The Economist is that the Labour Party isn’t on the ballot for a significant number of other seats, especially in the national assembly, for the 2023 elections.

Meanwhile, the recent article comes days after The Economist Intelligence Unit (EIU), an arm of The Economist of London, predicted victory for Tinubu in the 2023 presidential election