Adeleke Vs Oyetola: Why APC’s 7 Days Fasting and Prayer May Not Unseat Davido’s Uncle At Osun Tribunal


The struggle to retain the seat of power in Osun state between the All Progressives Congress (APC) and the Peoples Democratic Party (PDP) may have a significant resolution on Friday, January 27.

This is as the Osun state governorship election petition tribunal fixed Friday to deliver its verdict on the petition that is challenging Governor Ademola Adeleke as the winner of the July 16 election in the state.

Former governor Adegboyega Oyetola and the APC had filed a petition against the incumbent Adeleke, the PDP and the Independent National Electoral Commission (INEC).

Among many issues, Oyetola and the APC argued that there was overvoting in about 749 polling units in 10 local government areas of the state. 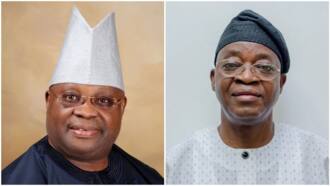 The party has subsequently declared 7 days of fasting and prayer for its members for spiritual backup for Oyetola to win at the Tribunal after tendering legal evidence.

However, the legal evidence and the fasting and prayer may not unseat Adeleke as the governor of Osun state due to the position of INEC’s counsel, Paul Ananaba.

Ananaba in its final written on the petition posited that Adeleke would still win the election with over 20,000 votes even if the polling units Oyetola and APC are contesting at the Tribunal are removed.

“If a deduction of 1750 units was carried out from the total 3763 units in the state, the second respondent will still emerge as winner with over 20,000 votes”

Adeleke is from an influential family that produced the first governor of the state, Isiaka Adeleke, and he is also an uncle to the popular afrobeat singer known as Davido.

The incumbent defeated and halted the second-term ambition of the former Governor Gboyega Oyetola of the APC in the July 2023 election.