Death Sentence Against Sheik Kabara Should Be Condemned by All Muslims, Dauda Dare Declares


The erstwhile Governorship Candidate for the Peoples Democratic Party PDP for Zamfara State Dauda Lawal Dare has Condemned the recent Judgment by a Shariah Court in Kano State in which the renowned Islamic cleric Sheik Abduljabar Nasiru Kabara was sentenced to death by hanging for blasphemy.

Dauda Lawal Dare, a guru in banking and finance, and former Executive Director of First Bank was reacting to the Judgment while addressing a group of journalists at his residence in Abuja on Monday.

The politician who is currently prohibited from contesting the 2023 Governorship election on the platform of the peoples Democratic Party PDP in Zamfara state for violating electoral process by court of law, said the Judgment by Khadi Ibrahim Yola is against all forms of Islamic jurisprudence and deserves all forms of condemnation by any right thinking Muslim.

The Banking expert who accused Judges in Nigeria of turning the nation’s Judiciary to a place where justice is bought with money, rather than the laid down rules and regulations, described as unfortunate, the happenings in the nation’s Judiciary and appealed to President Muhammadu Buhari to call them to order.

Dare, who is alleged to be holding a former Nigerian Petroleum Minister, Allison Maduake’s looted funds said he will hire lawyers on behalf of the Islamic cleric to apeal the Judgment and promised the family of the convict their livelihood until when justice is done to their breadwinner. 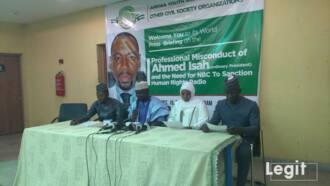 The Banker who is currently fighting an apeal against the judgement which banned him from contesting the PDP Governorship election in Zamfara State, also called on President Muhammadu Buhari to maintain his pledge to ensure free, fair and credible elections before exiting office in 2023, and to focus attention on the nation’s Judiciary to deal with judges collecting money for laundering or tempering with justice.

He said people in the country are beginning to lose confidence in the Nigerian Judiciary following the way and manner Judges are now handling cases in their various courts, where the highest bidder is the winner.

He also called on the President to intervene in the Kano Judgment by asking the Minister of justice to force the Shariah Court of Apeal to quash the judgment.

Dauda Lawal Dare who recently sent a powerful delegation to Deborah Samuel family to take delivery of Christmas present comprising foodstuf and clothing materials with a promise to relocate the family from Rivers state back to their Village Tungar Magajiya, said he has already ordered his legal team to appeal against the Kano death sentence passed on Sheik Abduljabar Nasiru Kabara.

Alleged secret passage of sharia law by Lagos assembly, a lie from the pit of hell

Meanwhile, the Lagos State House of Assembly has debunked rumours stating that the parliament had secretly passed the Sharia law into the state constitution.

The Lagos Parliament made this known on Wednesday, July 13 via a statement made available to Legit.ng. According to the statement issued by the Hon. Setonji David, chairman of the house committee on information, security and strategy, described the rumours as a malicious and unfounded reports.

Legit.ng gathered that there have been a series of social media posts stating that the Lagos Assembly passed the Sharia Law in a bid to get Northern support for Asiwaju Bola Ahmed Tinubu, the APC Presidential Candidates.