A woman fell in love with a Kenyan man online but it did not end happily as she expected.

51-year-old Sthembile Duma has a horror story where she lost everything because of love.

Sthembile’s story got some attention on Twitter and peeps were eager to share their two cents. Many people were less than sympathetic after reading all the details. Women scammed and left jobless because of online boyfriend

@VehicleTrackerz shared the story of a woman who was unlucky in love. Sthembile thought she met the love of her life on the internet when she started talking to her Kenyan man.

Sadly their romance ended up with her quitting her job because of him, a decision which rendered her homeless and without her pension of N2.2 million. The post detailed that Sthembile now only has four chicken eggs to her name.

Online users reacted to the story with many refusing to feel sorry for her. Netizens were not shy to express that being scammed online is nothing new and they thought it was her fault.

“She’s even embarrassed to show her face, they did her bad.” 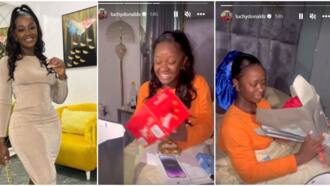 “Was the eggs part really necessary? LOL, I never eggpected that.”

“The more South African women suffer the more they learn, I mean how many times must we warn you about this kind of evils who pretend to be in love with you then all of the sudden “booom money is gone”?”

“Are we supposed to feel sorry for her?”

“Ao shem,was she that desperate for love or it’s Kenyan muti?”

Lady breaks up with her man

Meanwhile, Legit.ng reported that a lady ended things with her man over flowers and dates.

The lady complained in the leaked chats that her man failed to take out on regular dates.

The lady also complained that the man does not buy her flowers regularly.