Recall that Egbegbe was disgraced extensively on social media after he was arrested and went to prison for theft.

After serving his time, the filmmaker reportedly fell on hard times and MC Oluomo extended his help towards him.

In a post shared online by talent manager, Samuel Olatunji, the Chairman of Lagos Parks Management, MC Oluomo, has rehabilitated Egbegbe after his release from prison. 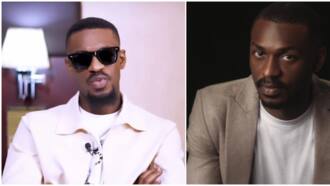 “A real Otilo “: Hilarious reactions as BBNaija Adekunle cries for his stolen phone to be returned

It was gathered that Egbegbe became impoverished after serving time in prison and a number of people distanced themselves from him so he needed a lot of help to survive.

In order to help out the disgraced filmmaker, MC Oluomo reportedly gave him a managing job for tricycles at the garage and it is said to be a top role.

The Lagos Parks boss put aside his differences with Egbegbe despite the filmmaker being known to abuse him in the past.

A source disclosed that MC Oluomo was worried that Egbegbe would return to his former life of crime if he was not helped.

“‘It is not in the nature of MC Oluomo to watch people suffer. He was concerned that Egbegbe might go back to life he left behind or go through unnecessary hardship hence his kindness towards him. He also feels Seun needs to feed and feed his hard mother.” 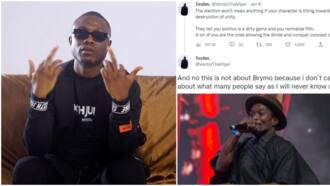 “This isn’t about Brymo”: Vector slams those making dangerous statements because of 2023 elections, fans react

A number of netizens were pleased by the news as they spoke on the importance of forgiveness and second chances. Read some of their comments below:

“God bless him and be with egbegbe too.”

“Good for him, everyone deserves another chance.”

“Wow this is really good news forgiveness is the key .hope he use this opportunity wisely and hope he change for good.”

“These are what many of ur pastors can’t do, but you all trolls mc nd call him tuta nd killers, but he has a kind hearth than ur saint pastors nd fathers God bless the king MC. “

“That’s kind of him,may my helper locate me too,no matter what I do.”

Seun Egbegbe visits mum after 6 years of being in prison Weeks after his release, Egbegbe finally paid a visit to his mother and shared a video showing the emotional reunion on his Instagram page.

The video captured Egbegbe’s arrival at his mother’s shop and how she swiftly locked him in a tight embrace.

The mother and son couldn’t hide their emotions, with the woman equally expressing her gratitude to almighty God.