“I’m a Proud Polygamist With My Full Chest”: Yul Edochie Sparks Reactions As He Gives Reasons for His Actions

Popular actor Yul Edochie is making headlines after he justified his action to become a polygamist with a backup reference from a bible verse, Exodus 21 vs 10.

In a lengthy post via his social media timeline on Sunday, December 18, Yul, who is married to two wives said he was directed by God to be a polygamist to give his son a proper identity. 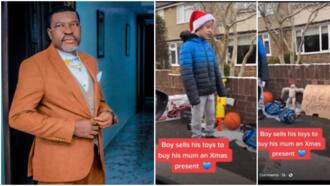 Yul acknowledged that his first wife May Edochie was not happy about his action but he stressed that it was a blessing for her.

“I’m a very proud Polygamist. With my full chest. Read Exodus 21 vs 10.The bible acknowledges Polygamy. It is my destiny. God directed me to do it. So I can give my son a proper identity. Therefore it came with many blessings. Blessings for me, blessings for my wife Queen May to calm her down cos as a human being she’ll definitely not be happy about it, and blessings for my wife Judy as well.”

See some of the reactions below:

This matter nor dey gree finish? It’s your life do it as it pleases you!” “Na Judy type this…. We know her hand writing.”

Yul Edochie, in a post on Instagram, reacted to the report of his dad and veteran actor Pete Edochie’s interview on his marriage to Judy Austin.

In a recent interview with Vanguard, Pete Edochie, who marked his 53rd wedding anniversary in October, revealed he didn’t feel good about his son’s decision to marry a second wife since he is a Christian.

According to Yul, there were other trending issues like actress Uche Ogbodo and Wizkid’s drama.

“My matter still dey ground? Una wan use my own spoil other people own. Allow Wizkid and Uche Ogbodo to trend in peace naa. This is their time.”