Adeleke made this allegation on Thursday, December 15, during a meeting with Osun State Traditional Rulers at Osogbo, Osun State Capital, The Nation reported.

During the meeting, Adeleke also confirmed that the state is indebted to the tune of N407.32 billion as of November 30th, 2022. 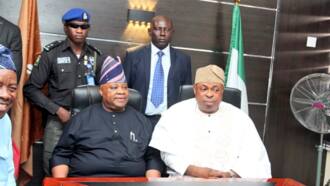 “My good people of Osun state, the total loan stock as of today is N331.32 Billion.

“If the N76 billion debt on salaries and pension are added, the state is indebted to the tune of N407.32 billion. The amount owed to contractors is yet to be determined.

“The only fund in government coffers, as of Monday 29th November, was for November 2022 Salary. Otherwise, the state treasury was empty.

“As your governor, I will ask questions on your behalf. And will demand answers,” Adeleke told the traditional rulers.

“Governor Oyetola must explain how the N331 Billion borrowed in the name of Osun State was expended, with no obvious infrastructural development to justify this huge debt.

“Governor Oyetola must explain how the N18 Billion Bridge Loan taken after he lost the election on July 16, 2022, was expended.” 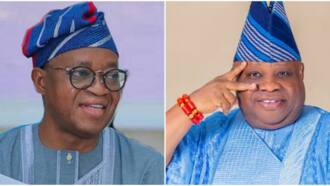 Governor Ademola Adeleke of Osun has appointed Samuel Aina as the new Head of Service.

This move was confirmed by Adeleke’s spokesperson, Malam Olawale Rasheed, through a statement issued on Tuesday, December 6, in Osogbo.

Meanwhile, Aina was appointed to replace Dr. Oyebade Olowogboyega, who served in the same capacity under the immediate-past Governor, Adegboyega Oyetola’s administration.