Peter Obi at Chatham House, Answers All Questions As He Reveals 3 Top Things He Will Do for Nigeria


The presidential candidate of the Labour Party, Peter Obi, has revealed what he will do to salvage Nigeria if elected president in the coming presidential election.

He made this known while fielding questions during his address at Chatham House, London.

Says he will address ethnic agitations

The presidential candidate of the Labour Party said the various ethnic agitations across Nigeria are a product of failed leadership.

The former Anambra state governor who said he condemned all agitators added that it was also important to identify the causes of the various agitations in the country. 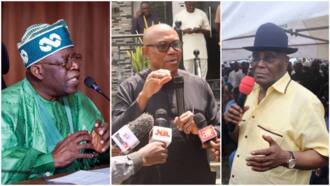 3 major challenges Nigerians expect Buhari’s successor to tackle once he assumes office on May 29, 2023

“I condemn all agitators, but in condemning them, you have to look at what brought about these agitations all over the place. Not only IPOB. We have (the) Yoruba Nation movement and all sorts. When you have created this level of massive poverty where 63 per cent of your population is poor, you’re going to create all sorts of problems.”

Promise to destroy the structure that has kept Nigerians in poverty

The standard bearer of the Labour Party (LP) also promised to destroy the structure that has kept Nigerians in poverty.

“Let me assure you of what we’ve been campaigning on. You have heard them say we don’t have structure; that is the structure we are trying to destroy — structure of criminality.”

“That is what I’ve mentioned that Nigeria has been held captive. That structure that has impoverished Nigeria, we will dismantle it. It will not be there; I assure you of that.” 2023: Don’t hand over a sick country to a sick person, says Peter Obi

Promises to turn around the power sector

Going further, Peter Obi also promised that the power sector will have a new life if he is elected president.

“Going to turn around the power sector — Nigeria generates about five to six thousand megawatts of electricity for 200 million people. And South Africa, the second biggest in terms of economy on the continent — 60 million people — generates about 40,000 to 50,000, and South-Africa in the past three months has declared emergency on power and said anybody can generate up to 100 megawatts without licence.

“So, somebody who is 60 million, generating about over 40,000, declared emergency, what do you think somebody with 200 million people generating five to six thousand would do? War.

“I’m going to declare war on power and I will solve it. Anybody who stands in the way, so be it.”

“Under this system, fighting corruption is not easy”, President Buhari confesses