Popular Instagram Comedian-turn-singer Carter Efe has successfully gotten his name signed on the body of his woman Nuella.

The skit maker’s girlfriend had “Efe” inked boldly on her back to show the intensity of her love for the comic act.

The video making the rounds on social media showed her sitting pretty in a gown that easily exposed the content written on her back. See a video of Carter Efe’s girl showing off her tattoo:

Fans react to the video of Carter Efe’s girlfriend

“Na buy everybody dey buy love ooo, once u don get money, u go get babe according to the size of ur money wey go love you . That’s how ppl dey get love nowadays SENSE OR NONSENSE OR SOMETHING ELSE??”

It won’t end in tears ijn.”

” Whn Dey serve her breakfast how she go do the tattoo.”

“Tomorrow we no wan hear say him no get water for fridge, na 2mins man, Na small gbola he get, make dis love Dey forever.”

“I no want hear say justices for anybody oooo..just Dey play. ” 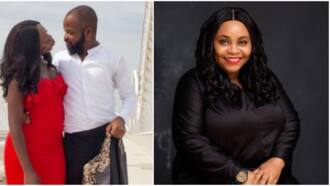 “Emotional abusers are nice and sweet to everyone”: Nedu’s ex-wife Hazel drops shade as he unveils new lover

Popular comedian David Ogechukwu better known as Elder O has given love a second chance as he remarried eight years after the death of his first wife, Charity Odoemelam.

In gratitude to God for making the big day a reality, the comedian flooded his Instagram page with pictures from his wedding ceremony.