US Court Postpones Sentencing Of Fraudster Hushpuppi To November 7

The US Central District Court in California has again postponed the sentencing of Ramon Abbas, a Nigerian Instagram celebrity, popularly known as Hushpuppi, who has pleaded guilty to multi-million-dollar fraud charges. 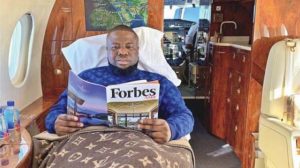 Hushpuppi was apprehended in Dubai, the United Arab Emirate (UAE) in June 2020, and subsequently taken to the US, where he pleaded guilty to the charges in July 2021.

According to the notice from the US authorities, the trial judge, Otis Wright, has fixed November 7, 2022 as the date to sentence Hushpuppi.

“COUNSEL ARE NOTIFIED, the Sentencing is CONTINUED to November 7, 2022 at 11:30 a.m. as to Defendant Ramon Olorunwa Abbas,” the court’s announcement shifting the sentencing reads.

The sentence hearing was initially moved by Judge Wright from February 14 to July 11, 2022 before shifting it to September 21 and now November 7.

Hushpuppi, in July 2021, agreed to plead guilty to the multi-million-dollar fraud charges slammed against him by the American government.

He has been in prison since his arrest in Dubai and rendition to the US in June 2020.

In a dramatic twist, Mr Abbas, who initially maintained his innocence, entered into a plea bargain agreement with the US authorities in July 2021, in the hope of getting a lighter punishment.

He pleaded guilty to Count Two which is “Conspiracy to Engage in Money Laundering,” an offense that attracts maximum imprisonment of 20 years among other punishments including full restitution, his plea agreement with the U.S. government states in part.

Despite pleading guilty, Mr Abbas will not be freed from paying restitution.

“Defendant understands that the defendant will be required to pay full restitution to the victim(s) of the offence to which the defendant pleads guilty.

Not being an American citizen, he will be deported after completing his jail term and paying up the amount to be restituted.

The maximum penalty for the offence which Mr Abass hopes will be reduced at his sentencing include: “20 years’ imprisonment; a 3-year period of supervised release; a fine of $500,000 or twice the gross gain or gross loss resulting from the offense, whichever is greatest; and a mandatory special assessment of $100.”

In June 2020, the 39-year-old known for flaunting his opulent lifestyle on social media was arrested in Dubai by special agents including the Emerati police officers and Federal Bureau of Investigation (FBI) operatives.