What is WiFi Calling & How to Get it on Your Phone

Most of us spend time in at least a few places where our phones just don’t work, whether it’s a room or two at home, a favorite basement coffee shop or some other signal-blocked location. That’s where WiFi calling can save the day. Instead of relying on the cellular phone network, WiFi calling and texting use an available WiFi network to place your call over the Internet.

Clearly, if you don’t have a cellular signal or it’s spotty, the ability to make WiFi calls comes in handy. But that isn’t the only reason you’ll want to use WiFi calling.

What is WiFi calling

WiFi calling is regular calling on your cellphone, except your carrier routes the call over an available WiFi network instead of its cellular network. When you call, your phone automatically selects the best network — cellular or WiFi — you don’t need to do anything.

How much does WiFi calling cost?

That means WiFi calling is perfect for overseas travelers because there’s typically no roaming or international charge for making calls or sending texts back home. And many carriers’ plans include free calling to Canada and Mexico. Keep in mind, though, that you will be charged an international rate based on your international calling plan, if you call an international line using your U.S.-based smartphone. And, WiFi calling isn’t supported in some countries, including Australia, India, Cuba, Singapore, and China.

How to make a WiFi call 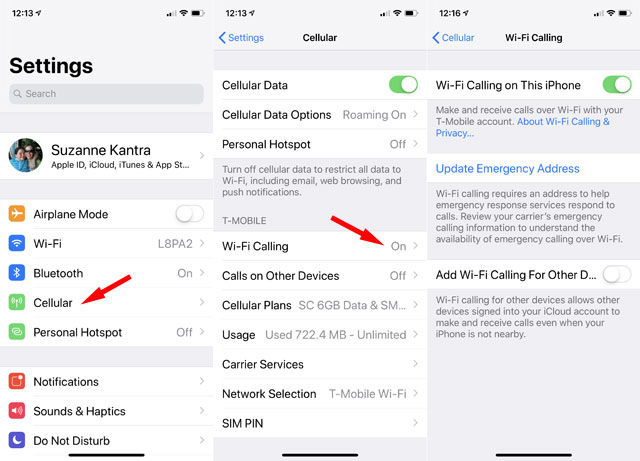 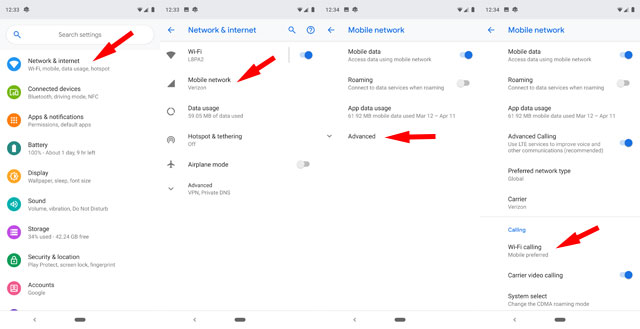 Once you activate WiFi calling, you dial or text as usual. The routing of your call or text is handled automatically in the background.

Does my carrier offer WiFi calling?

All major cell phone carriers offer WiFi calling, with support for the recent iPhones and Android phones. Here’s the latest on which phones support WiFi calling for each of the major carriers:

T-Mobile (and Sprint): All new T-Mobile smartphones and newer T-Mobile and Sprint smartphones support WiFi calling. To find out if your existing model supports it, go to Settings on your device and search for WiFi Calling.

AT&T:  All recent-model smartphones support WiFi calling. To find out if your phone supports WiFi calling, go to Device Support, find and select your device, select “View All Tutorials,” selection “Calling” and then “Wi-Fi Calling” to view the instructions. If WiFi calling isn’t listed, your phone isn’t compatible.

Of course, if your handset doesn’t support WiFi calling, you may be able to find some workarounds. Apps like FaceTime, Skype and WeChat allow you to make voice and video calls over WiFi as well as send text messages.

How WiFi calling compares to cellular

Thanks to the growing popularity of free public WiFi hotspots, you may not need to pay another dime to make a call again. In fact, Cisco VNI predicts global hotspots will increase double from 2018 to 2021, resulting in 254 million hotspots.

But a cheap price tag doesn’t always equate with high quality. Trying to get the best signal for a WiFi call is challenging. Many times, the quality of service is through individual users with a WiFi network, and there is no guarantee there will be enough bandwidth for a high-quality call. Plus, signal strength can diminish as more people attempt to use the same network, such as at hotels, airports or athletic stadiums.

Consumers may have another gripe with WiFi calling service: there may be a 1- or 2-second delay in the conversation. Think of the delay you hear with the echo of the same news broadcast aired on different TVs in your home. If you’re accustomed to receiving an immediate response using traditional phone service, a conversation over WiFi may annoy you.

While it doesn’t make sense for most people to switch to a WiFi-only provider like Scratch Wireless, Wi-Fi calling can make a big difference if you have limited minutes, get poor reception or travel abroad.

Does WiFi calling drain or save your battery?

In poor cellular coverage areas where you have a decent WiFi signal, WiFi calling will help save battery life. In cases where you have low or no cellular signal, you may want to consider turning off cellular to preserve your battery. However, if you are not connected to a WiFi network, leaving on WiFi can drain your battery.