The governor of Rivers state, Nyesom Wike, has said that his prayer to prevent Nigeria’s former president, Olusegun Obasanjo from making public comments against his the 2023 presidential candidate of the Peoples Democratic Party, Atiku Abubakar, failed.

Speaking at the flag-off ceremony of the construction of the Mgbuodohia Road in Rumuolumene Town of Obio-Akpor Local Government Area on Tuesday, January 4, the governor said he know Obasanjo would never support Atiku.

He, however, said he hoped against all hopes and feverntly prayed that the ex-president stays away from commenting on the 2023 presidential ambition of Atiku.

Further noting that Obasanjo, whom Atiku served as a vice president during his tenure is expected to be the best referral the PDP flag bearer should have. 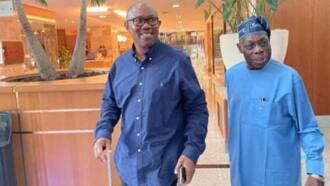 “I meant no bad. I’m only worried as a prominent PDP member. A man who loves PDP should be worried. I was not mocking anybody. I was merely worried. My prayer was, look, let Obasanjo remain quiet and not say anything. That was all my prayer, but my prayer didn’t work. 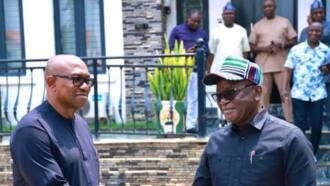 Former president Olusegun Obasanjo had earlier been warned to desist from telling Nigerians, especially the youths who they should vote in the 2023 presidential election.

The warning to Obasanjo was given by the Patriotic Youth Front of Nigeria (PYFN) on Tuesday, December 3.

According to PYFN, Obasanjo lacks the moral standing to tell endorse Peter Obi’s candidacy ahead of the 2023 polls.

After months of speculations, former President Olusegun Obasanjo revealed the presidential candidate he is backing.

Obasanjo picked Peter Obi of the Labour Party ahead of others as he released an open letter to Nigerians on Sunday, January 2023.

The elder statesman who no longer participates in partisan politics revealed why he picked Obi over other contenders.