“His Mum Took Him from Me”: Nigerian Man Shows off Grown Son He Had at 17, Holds Him Tenderly in Viral Video

A Nigerian single dad has made public his grown son after years of fighting for the custody of the boy.

Taking to TikTok, the man shared a loved-up video of the two of them spending time together, as he apologised for their separation.

He revealed that he got custody of the boy after three years, noting that he had him at the age of 17.

The dad described the three years without the boy as hellish and marvelled at how much he had grown. 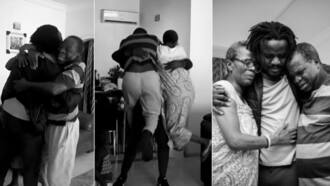 “This made me cry”: Emotional video trends as man reunites with his family after years apart

Responding to netizens who enquired about the lad’s mother, he said they were meant to raise the boy together but she took off with the boy.

“Yea, but we were meant to raise him together, she took him and ran leaving me.”

“I must say his mum did a great job.”

“But u told her to abort it and she refused now u want the child u Dey mad.”

“Why would she go with u guys child like that?? and am happy u saw him at least the family is complete now.” 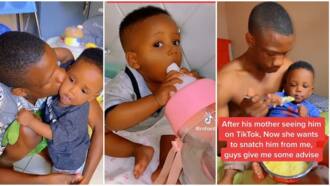 “His mum left me for another man”: Single dad struggles to raise son alone, video of the child emerges

“But his mum also did a good job raising him into a healthy looking boy.both parent are important in his life.”

“I hope you and his mom make amends and be together, coz giving him material things won’t be enough no child will like seeing both parents not together.”

Meanwhile, Legit.ng previously reported that a single dad had shown off his four daughters with pride.

The video he made showcasing the kids is a response to a netizen’s comment insinuating that he is a married man. The man declared that he is actually a single father and showed off the girls from one mum aged 15, 13, 11 and nine years.

Like a model photoshoot, he showed off each one starting from the eldest to the youngest. He, however, didn’t say anything about their mum’s whereabouts.